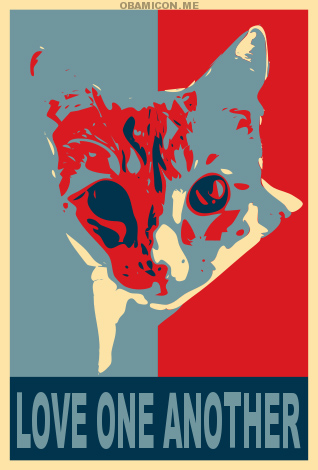 If you're paying any attention to American politics, you know that the Democratic National Convention is going on right now. I think and strongly feel that in this time of extreme partisanship, the message of love is more relevant than ever.  Constant polling shows that many people feel the country is "going in the wrong direction."  If this is true, than I don't believe the blame can be placed in any one place.  If the country is going in the wrong direction, it's because of a lack of love and people caring more about their parties, their success as a party, and making sure the guy/ gal from the other party fails than doing what's right for the most people.  It's really up to us as individuals to make really meaningful everyday changes.  Let's start with just showing a little love and helping each other out.  We're all on the same team after all.
Tonight's project was made with the help of the folks over at Obamicon.Me and features my buddy Rory the cat who has made several appearances in may projects already, but he's so frickin' cute, I can't help myself!
Posted by Cathryn at 8:36 PM